Biography of the chef Laurent Léveillé 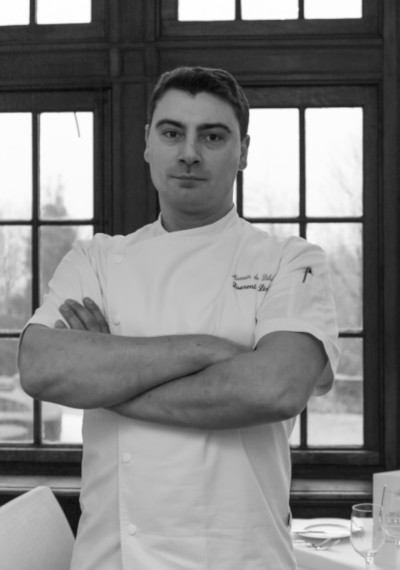 Laurent Léveillé is an executive chef who has worked in fine dining for twenty years. In October 2017, his travels brought him to the Manoir de Lébioles in Spa, gateway to the wild Ardennes.

He gained his culinary education from renowned chefs in Michelin-starred restaurants, such as Jean-François Girardin (a winner of the Meilleur Ouvrier de France award in 1993) at the two-star Ritz in Paris, Jacques Rolancy (MOF 1996) at the one-star Windows Restaurant in London, Christian Faure (MOF 1997), pastry chef at Le Cordon Bleu in London, and Michel Roux Jr at the Michelin-starred Le Gavroche Restaurant in London.

Since then, he has continued his travels around Europe, working in the most refined restaurants, going on to develop catering concepts for clients such as Microsoft.

Laurent Léveillé has always had a keen interest in competitions, and his entries have won him some remarkable distinctions, including:

A significant feature of his career has been in training future generations. This includes teaching chefs at Le Cordon Bleu academy of culinary arts in London.

Highlighting the products of our beautiful region, transforming them with passion in the best traditions of gourmet cuisine, thrilling the guests and sharing the experience with them, becoming immersed in the aura of the place to give the restaurant at the Manoir de Lébioles a reputation for excellence – these are just a few of chef Laurent Léveillé's ambitions.